Finding a camera drone on a budget is an uphill battle as quality models generally cost a couple of hundred dollars. It becomes even more challenging if you are a beginner since beginner drones usually do not come equipped with a camera and those that do are often incapable of capturing quality images.

There are, however, some camera models that the cash-strapped drone novice can turn to, and among them is the U49C Red Heron Camera Drone from Force1.

Quick Navigation
Who is this product for?
What’s included?
Overview of features
Tutorial
Alternatives
Conclusion 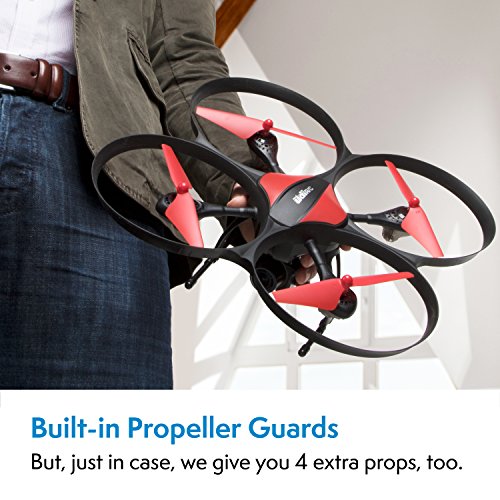 With its U49C Red Heron Camera Drone, Force1 has taken many of the features one would commonly expect to see only on a professional model and made them available to newcomers with a limited budget.

Who Is This Product For?

The Force1 U49C Red Heron Camera Drone sells for just under $100, which makes it an excellent choice for those who are searching for a quality camera drone but are not willing to spend hundreds of dollars on one. With a variety of flight-assist features, it is an excellent learner drone and will streamline your development as a pilot.

It is important to note though that the Force1 U49C Red Heron Camera Drone does not boast the greatest battery life. With its battery life rarely exceeding five minutes even on a full charge, this drone is far from ideal for those who wish to spend long periods of time flying their aircraft.

The Force1 U49C Red Heron Camera Drone comes packaged with some accessories intended to enhance the pilot’s experience. When you purchase this product, you will receive a high-definition camera, a remote control, two batteries, and a USB charging cable.

Also included in the box is a micro USB cable and an SD card for easy sharing of images and video files. You will also receive four additional propellers to combat any damage done to the pre-installed propellers. 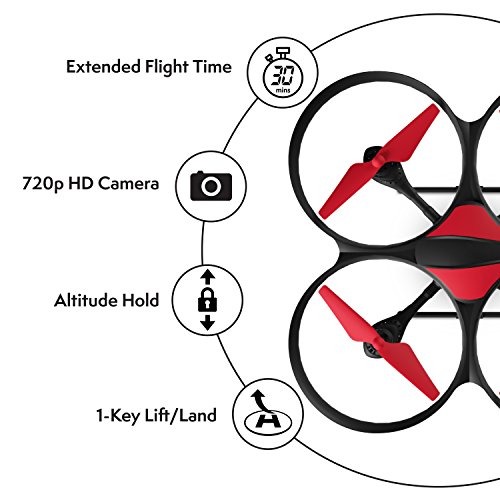 The U49C Red Heron Camera Drone boasts some pretty impressive features. Obviously, the most notable is the drone’s included 720P high-definition camera, which is capable of capturing 120-degree, wide-angle shots. Videos and photographs captured using the U49C Red Heron can also be easily uploaded to social media through the included SD card and micro USB cable.

This drone boasts a total of three-speed modes, allowing you to push the envelope further with each flight as you develop as a pilot. Keeping drone novices in mind, Force1 equipped it with one-key takeoff and landing features, taking the stress out of the two most complicated techniques of piloting a drone.

Similarly, this aircraft boasts a headless mode, which allows it to move in any direction without turning or flipping, as well as altitude hold that enables it to hover at a certain height for an extended period.

If you are a camera drone novice, flying one for the first time can be more than a little intimidating. While the nerves you are feeling are understandable, they can be easily overcome by watching the video below.

The video will run you through the process of piloting the Force1 U49C Red Heron Camera Drone, ensuring you’ll know exactly what you’re doing from the moment you take it out of the box.

If you’re searching for a camera drone on a budget, you’re going to have a hard time finding something more impressive than the Force1 U49C Red Heron Camera Drone. The only drone on the market right now that could rival this model regarding price and performance is also a product of Force1.

The Force1 X5UW Thunderbolt is one of the easiest to handle out there. It boasts 6-axis gyro stabilization technology to ensure its flight path is uninterrupted by weather conditions. Also, the integrated camera is capable of capturing 720P high-definition videos.

Additionally, its one-key takeoff and landing options allow even the most inexperienced user to safely raise and lower the drone, while full 360° flips can be performed at the touch of a button. When you purchase a drone from Force1, you are granted access to the company’s superior customer care department, which promises 24-hour monitoring and one-on-one communication.

Generally speaking, when you purchase a drone camera for $100 or less, you can expect to make a couple of compromises. With the Force1 U49C Red Heron Camera Drone, this is not the case.

This drone is capable of capturing seriously impressive shots, the kind that will leave those who view them under the impression that they came from a far more expensive model. Additionally, with its headless mode, altitude hold, and one-touch takeoff and landing, this is arguably the ideal drone for an aspiring pilot.